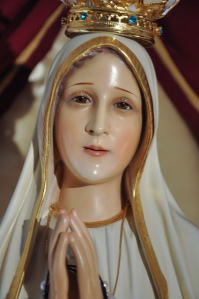 Our Lady of Fatima, pray for us!

As my faith has grown over the years I’ve experienced a number of such moments. One of my earliest occurred when I was about 11 years old. I was delivering papers for my paper route and I’d just thrown the 15th paper onto a roof (I didn’t have good aim). Now I wouldn’t have enough papers to finish my route and I shouted “G_d damn!” As I continued on my way I thought about what I’d said and realized how awful of a thing I had just done to Someone (God) I claimed to love. In that moment I vowed never to say that again.

A bit later in life I was asked by my boss to attend a seminar on immigration and my eyes were opened to the reality and truth of the immigration situation in the U.S. and what it meant for our faith. I realized in that moment that all the anti-immigration rhetoric I believed had to go if I were to continue to claim to be Catholic.

I believe, I hope, I pray that this is such a moment for many friends and people of our nation today who call themselves Christian (Catholics included). If for no other reason than the world is watching us in this moment and how we respond to the refugee crisis will profoundly affect the world’s opinion of us: do we actually walk the walk or just talk the talk.

I know it might not make sense and seems just a little bit terrifying, but wasn’t that exactly how you felt the first time

you encountered God and everything in your life changed? Well, this moment can be that for you again and perhaps for the refugees as well. A number of such encounters with Christ have already been reported where Muslim refugees are converting after encountering the love of Christ in their new host countries. Isn’t it even the slightest bit possible that our hospitality is what brings them to faith?

Yet, despite what I know to be sincere and deep faith in many Christian friends of mine, they still demand we close our borders and basically say, “I’ll pray for you, here’s a coat.” And what this comes down to is fear. It always comes down to fear. Throughout history refugees (or aliens) have been feared and hated and demonized without exception. And don’t try to say this is different. It’s not. It’s no different than the fear of the Jews during WWII; it’s no different than the fear of the Catholics, the Irish or the Italians in the great migrations towards America, etc, etc, etc, down throughout history.

So here’s the thing… perfect love casts out fear. There is no fear in Christ. Fear is a sin, or it can be if you allow it to prevent you from loving. That’s why we always demonize or objectify the enemy, because you can’t love a demon or a thing. I’m afraid of spiders but that doesn’t stop me from loving God’s creation. I’m afraid of a terrorist bomb blowing up my family but that doesn’t stop me from loving the refugees. In fact, my heart goes out to them all the more because they’ve been living in the hell that I’ve only heard of on the news, they’ve watched their loved ones blown up in front of them while I’ve watched the aftermath on T.V.

Ultimately, we are to be imitators of Christ, not just when it’s easy but when it’s hard; especially when it’s hard; always when it could cost us everything! Fact check: there are churches in the U.S. who have to have guards for every priest and Eucharistic Minister during Communion at Mass because there are so many people trying to steal the Eucharist for stupid YouTube videos or worse, Satanic Black masses. Why would Christ allow that?! Why would he risk it?! One word: LOVE. He became man and allowed himself to be crucified. He became bread and allows himself to be denied, mocked, stepped on, ignored, forgotten, thrown away and desecrated in a Satanic ritual, all for the hope that you would spend five minutes with him, sometime. How can we love his children any less?!

What it comes down to is this: I would rather die from a terrorist bomb while trying to love, than live in pseudo-safety while I deny love to my brother and sister because I am afraid.

In this year of mercy, let us remember the mercy of God. Let us fear, not the one who can kill the body but not the soul, rather fear the one who can destroy both body and soul in hell (Matt 10:28). Or, if you’d prefer to act out of love rather than fear:

Luke 7:27-38
27r “But to you who hear I say, love your enemies, do good to those who hate you,s28bless those who curse you, pray for those who mistreat you.t29To the person who strikes you on one cheek, offer the other one as well, and from the person who takes your cloak, do not withhold even your tunic.30Give to everyone who asks of you, and from the one who takes what is yours do not demand it back.31Do to others as you would have them do to you.u32For if you love those who love you, what credit is that to you? Even sinners love those who love them.33And if you do good to those who do good to you, what credit is that to you? Even sinners do the same.34If you lend money to those from whom you expect repayment, what credit [is] that to you? Even sinners lend to sinners, and get back the same amount.v35But rather, love your enemies and do good to them, and lend expecting nothing back; then your reward will be great and you will be children of the Most High, for he himself is kind to the ungrateful and the wicked.w36Be merciful, just as [also] your Father is merciful.”

Finally, here’s an example of how our nation should act. Remember, the world is watching and God is depending… on you to love as he loves, even if it means to die as he died.

I am a passionate Catholic, husband and a father of four kids. I have been a Catholic youth minister, writer and speaker for over 18 years and have earned a Master's in Theology with a minor in Philosophy. Through many years of struggle I've come to embrace my awkwardness and use it to the best of my ability to share my faith with others. God has blessed me with the gift of faith and has called me to serve him by serving young people and families and to help them encounter Christ in their lives. As Leon Bloy once said, "At the end of life there is only one great tragedy, not to have been a saint."