That awkward moment when you realize the person treating you like crap is your “neighbor” and you’ve sort of got to treat him with mercy and love. That happened to me recently. I was working with someone on a project (a board game I’m preparing to Kickstart) and I didn’t effectively communicate with him to make my dream a reality. He didn’t take it well, to say the least. I tried my best to apologize and make amends but he ignored all that and in my heart I passed judgment on him.

It seems like such a small thing, passing judgment on someone who rubs us the wrong way, it seems such a small thing, a harmless thing, a justified thing at times to judge and speak ill of those who offend us. “They deserve it,” “That person is rotten to the core,” “She is just getting what she deserves,” “I’m only speaking the truth about him so it’s not really gossip.” But in reality, it’s a big problem. I’m not claiming it’s easy, to show mercy and forgiveness, in fact I fail at it myself so often, but it’s worth saying and being reminded of. After all, St. Therese said, “You cannot be half a saint. You must be a whole saint or no saint at all.” And it’s precisely in these little things where we fail to be a whole saint.

Today’s Gospel strikes to the heart of the matter: Luke 10:25-37. In this passage Jesus is questioned by a scholar as to how to inherit eternal life. Is this not the crux of sanctity… uniting ourselves for eternity with God?! Jesus turns the question around on the scholar and asks him to sum up the Law (which in the Jewish understanding meant “teaching”). The scholar responds by stating the “Greatest Commandment”: to love God with your whole self and to love your neighbor as yourself. “Do this and you shall live,” Jesus responds. Easy, right?

The scholar, perceiving exactly how difficult this would be immediately wishes to justify himself by asking, “Who is my neighbor?” This the way of things, isn’t it? “But Lord, my neighbor s a jerk!” “I’m just trying to teach him a lesson!” “He deserves it!” “He doesn’t deserve my love, he’s a sinner!” “He’s disgusting, his lifestyle is so obviously wrong that I just can’t love him.” “What would others think of me?”

To our limited vision, according to worldly wisdom our justifications make sense. But our ways are not the Lord’s ways. How does Jesus respond to the “justified” scholar? By telling him the story of the Good Samaritan. You know the story, the priest and scholar ignored the dying man on the road but the Samaritan (the one who was considered lower than a dog, to Jews) saw the man’s wounds and had merciful love on him. And that is how we’re called to act to all we meet along this road of life; it’s not easy.

Most people we meet along our road are not literally lying in the street bloodied and dying. As always, when reading Scripture we must probe deeper than the surface of things. Most people look normal and healthy, as you and I do. But that’s only because most wounds are not visible to our senses. Each of us is broken and dying on the inside. Most of us harbor deep wounds that cause us to love like half saints, or even less than that. The robbers who left the man for dead are all those that wound us throughout our lives, who hurt us, abandon us and leave us for dead; those who rob us of our dignity through bullying; those who rob us of our ability to have healthy relationships through abuse and neglect; those who rob us of so much more, often times because of their own wounds.

So that person who “deserves” our justified judgment is wounded just as we are and thus, in God’s eyes demands our mercy and love! It is up to us to enter into the person’s woundedness, even if that simply means forgiving them in your heart and not judging them. A transgression forgiven heals the victim and the transgressor, for “where sin abounds grace abounds all the more”.

But, if possible, more is demanded of us. To love our neighbor as ourselves requires sacrifice and accompaniment. We are called, not simply to have pity on our neighbor but mercy. And mercy doesn’t simply pour some ointment on the wound and walk away. The Samaritan didn’t just pour some wine and oil on the man’s wounds and go on his merry way. No, he lifted him onto his own donkey and carried him to an inn and paid for his care and promised his return. 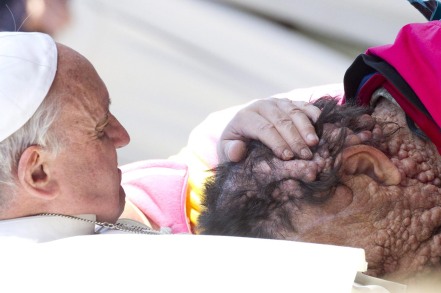 Do you see that accompaniment?! The Samaritan accompanied this man to safety, to deep healing; he loved him as a brother, a man who likely would have treated the Samaritan as a dog if they’d met under different circumstances. Recall, this is a story directly out of Jesus’ mouth, not just a nice thought of some pious theologian living in a comfy monastery. This is the demands of love, of the Law of eternal salvation. To be a whole saint means to have merciful love on all those we meet, on each and every one of our neighbors, no matter how beautiful or disfigured (inside or out) they may be. We are not called to save them; we are called to love them; just as we are not called to save ourselves but to be faithful to the One who loves us onto eternal life.